<‐ CARMA Summer Fundraiser, CARMAthon, Generates over $300,000
Ron McAnally To Be Recognized Saturday at Del Mar for a Lifetime Well Spent at the Racetrack ‐> 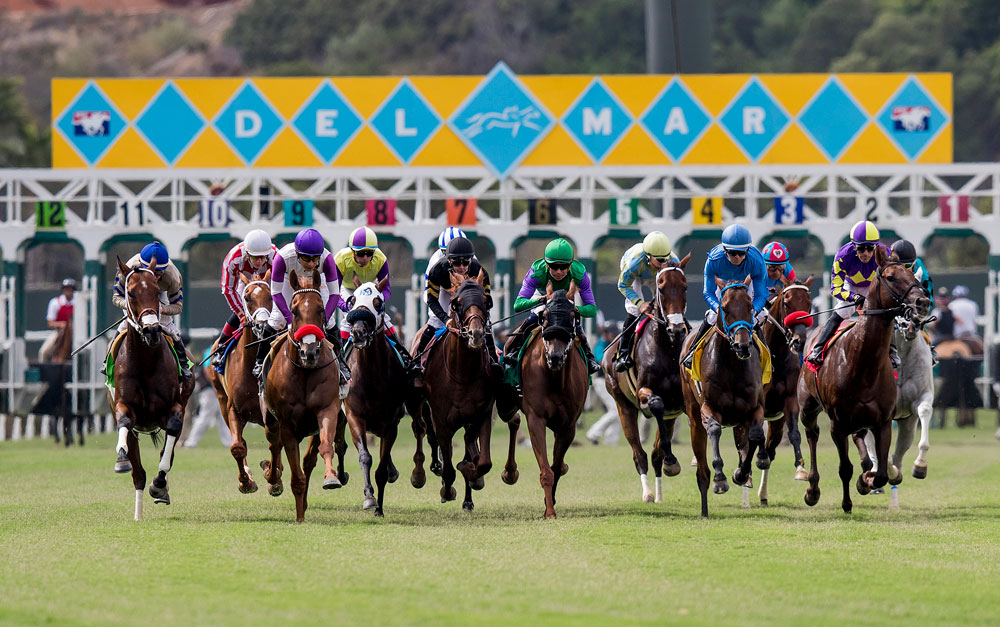 Del Mar’s Bing Crosby Season, which offers the premier late fall racing in America, will present the richest stakes schedule in its nine-year history featuring 13 major stakes races – nine of them Graded – and two overnight events worth a total of $2,450,000. The season kicks off on Friday, November 11 and goes through Sunday, December 4.

Topping the roster for the 13-day Crosby session are a pair of Grade I offerings on closing weekend, each carrying enhanced purses of $400,000 – the Hollywood Derby for 3-year-olds at a mile and one-eighth on turf December 3 and the Matriarch Stakes for older fillies and mares at a mile on turf on December 4.

Also of note on the stakes agenda are $50,000 purse boosts to a pair of tests, one on grass for fillies and mares, the other on the dirt open to all. The former is the Grade III, $150,000 Red Carpet Stakes at a mile and three eights on the lawn slated for Thanksgiving Day, Thursday, November 24. The latter is the Grade III, $150,000 Native Diver Stakes at nine furlongs on the main track on Sunday, November 27.

Del Mar additionally will present on December 3 the first running of the $100,000 Stormy Liberal Stakes at five furlongs on the turf for 3-year-olds and up. Stormy Liberal, of course, was the former claimer that trainer Peter Miller and owners Rockingham Ranch and David Bernsen turned into a two-time Breeders’ Cup Turf Sprint winner (including the one in 2017 at Del Mar) and an earner of more than $2.2 million. The Stormy Liberal is one of 10 grass stakes offered during the stand.

The meet presents racing three days a week – Fridays through Sundays – with the one exception of Thanksgiving when racing is held Thursday through Sunday. First post daily will be 12:30 p.m. with the special case of an 11 a.m. start for the Thanksgiving card.

A pair of overnight stakes – each carrying $75,000 purses -- get the season rolling with the Let It Ride Stakes for 3-year-olds at a mile on the green on November 11 followed by the Kathryn Crosby Stakes for older fillies and mares, also at a mile on the turf, right behind it on Saturday, November 12.

The track’s sizeable turf offerings during the stand have proven to be magnates for stakes horses from around the country in the past and that is not expected to change this year.  The last two weeks of the season provide eight graded stakes on grass worth more than $1.4 million.

Here’s the full list of the Bing Crosby stakes: